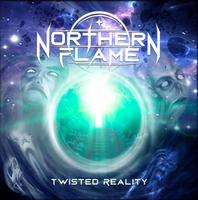 The project called Northern Flame, originates from Pohjanmaa, Finland. This Melodic Metal project saw its first rays of light back in 2002. For a long time the band consisted of three members : Niclas Buss, Simon Granlund and Emil Stenros.

After releasing two demos they went in to hiatus as Emil had to leave the band due to studies in Southern Finland.

Between 2015 and 2018 the band performed live in Finland and Sweden at metal oriented festivals, like Rainbow Rock Festival, Stockholm

At the present moment the band consists of five members and have just released a full-lenght album.

The format is so far digital, but there will be a physical cd-release as well in early 2021. The production for this new album set the bar higher than before with mixing done by Anders Höglund (Midas Productions Ltd., Finland) and mastering by Neil Pickles (Reveal Sound, UK).

The lyrics to four of the songs are written by Eddie De Witte (vocalist of Sheltered Sun), poetic and beautiful lyrics that creates a great collaboration between him and Northern Flame. Rest of the lyrics are written by Niklas Buss, Trygve Strömvall and Anders Olin.

Niclas Buss writes most of the music together with Alexander Nybond. Niclas works as a music teacher of classical music and has an passion for Baroque music which can be clearly heard in the music, like in the instrumental intro to the album. We also get to hear inspiration from other timeless music like hymns.

Highlights from the album:

"Glowing Flower", a superb symphonic piece where you get a lot of aspects of symphonic metal. Buss showing his skills as a guitarist and also we get to hear the Yngwie Malmsteen influences in full.

"Stone Of Grace" For anyone who ever admired the fastest songs of Sonata Arctica. Here you got all that goes on in those songs together with meaningful and beautiful lyrics.

"Shimmering Solstice" and "Fuel My Heart" Songs where we get to hear the Nightwish influences in full. In Shimmering Solstice Emma Backlund ( In Divinia) sings the female vocals creating a beutiful duet between her and Simon.

"Heaven & Hell" Written by Trygve Strömvall and Niclas Buss. Together with some operatic vocals from Simon and great backing vocals.  Lot of Nightwish vibes.

"Starfall On A Cold Winters Night" Instrumental where every musician in the band gets to shine each with their own instrument.

"Paradise". Starts out and ends like a hymn proceeds in to a keyboard fest, then turns in to a Nightwish track even not having any female vocals, but Simon Grandlund showing his wide vocal range.  A great outro track.

If you are in to symphonic, melodic metal and speed/power metal this album serves you all that.